Typing. Something we do every day and mostly take for granted. That is until our keyboard starts acting crazy. Keys don’t register, they get stuck, or they just double register. Either way it’s annoying and that’s exactly what started happening to me. Again. 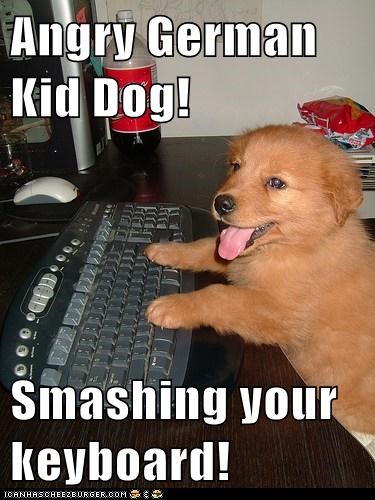 I started thinking about the keyboards I’ve had over the years and I realized that in the last three years I’ve replaced my keyboard at work three times including this latest incident. I don’t know that I’m overly hard on my keyboards but they get a LOT of use. To be fair, the keyboards I’ve been using are the ones from our PC manufacturer and buying them tends to be an afterthought in the ordering process. Mainly because we’ve got so many laying around from previous generations of desktop purchases that they’re more of a disposable commodity than in previous years. Which got me thinking… Have I ever had a favorite keyboard?

Thinking back, it’s obvious to me that actually yes I did have a favorite keyboard… and surprisingly enough it was one I had almost 20 years ago. All I could remember was it was an addison keyboard and it was kind of split in the way of the ergo keyboards. I did some google searching and found it! The KB-7001. This keyboard lasted almost 7 years before it’s PS2 port shorted out one day. 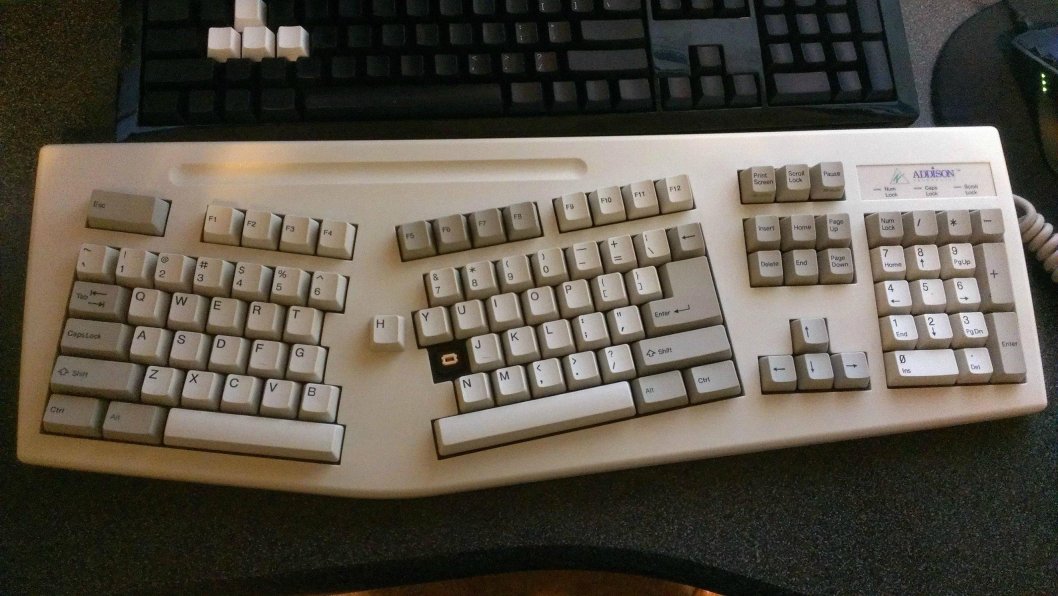 After I found it of course I had to ask myself why it was my favorite keyboard and after a few moments of reflection I realized it was the keys themselves and the tactile feedback. The clicky clicky if you will. This is important for a few reasons… First off this old keyboard used what was called white alps switches which were mechanical in nature. They gave off a satisfying click when pressed all the way and you could feel it when they actuated. They were done in a way that made you feel like you were a typing king of speed. This led me to doing research into “mechanical keyboards”.

In hindsight I should have realized that mechanical really just means “like they used to make them” because back when I started there was no such thing as a membrane or dome style keyboard. Nearly all of todays keyboards (minus the mechanical market) are made with a mass production mindset and the keyboard you’re most likely typing on now is the result. Spongy typing, prone to wearing out, and overall quiet and non-obtrusive to other workers. I’m not a statistics guy by any means but I’ve read and agree with others that keyboard typing speed potential in the past 15 years has been reduced significantly due to the cheaper keyboards that people are mostly using.

So what to do. I researched the current generation of mechanical keyboards and read all about the cherry mx switches and the different versions. In a nutshell the most popular ones are blue, black, brown, and red. Blue being loudly clicky and tactile, brown being tactile but not overly clicky, black being neither clicky nor tactile but very stiff, and then red switches which are like the black switches only much easier to actuate.

Easy enough! I found a very good article on Overclock.net with more information on the different switches if you’re so inclined to read it. There’s also a good video on youtube that goes over some of the current models of mechanical keyboards and the differences. [Mechanical Keyboard Overview and Showcase]

As the mechanical keyboards vary in price by a huge margin ($50 to $300+) it meant I had to evaluate exactly what I was going to be using the keyboard for. My first impulse was to go with a gaming keyboard as it’s the best of both worlds and I’m a gamer by heart. However, since the red switches do not have tactile feedback and this was for work I knew the choice was going to have to be either the blue or brown. Since I have my own office and the nostalgia factor was too great to worry about a little noise, I went with a full sized keyboard that has Cherry MX blues. .

Since I didn’t want to spend a ridiculous amount of money, I took the easy (aka cheaper) way and went with a Rosewill RK-9000 keyboard. I also managed to find a great deal on Amazon for a new (repackaged version) for a slight discount off the $65 regular price. This keyboard has no media keys, no laser etched lettering, no back light, no whammy bar, or anything like that. I even re-purposed the wrist rest from my old keyboard and used some packing tape to mount it to the new keyboard. (don’t judge me!)

Overall however, I’ve had this keyboard a little over two weeks and so far the difference to me has been amazing. Sure it’s loud and sounds like a machine gun at times when I’m really getting into the typing groove but I’m reliving nostalgia every day and I love it.

The one thing I could not predict when purchasing this keyboard is the effect it’s had on others in the office. I’ll be happily typing away and a random co-worker will pause by my door or even drop into my office and just stand there for a minute before commenting on a memory or reflection that the sound has rekindled from their past. It’s funny how something so unassuming and technically boring can bring back such strong memories and feelings from earlier times.

If something as simple as a mechanical keyboard can do that then what else are we taking for granted that can do the same?